VOFAN, Dai Yuenhon (戴 源亨, Dài Yuánhóng), is a Taiwanese artist mostly known for his unique, border-less art style that uses a lot of bright pastel colors and soft, natural lighting. He is the illustrator for the Monogatari light novels, having drawn every cover in the series along with illustration pages, promotional artwork, and end cards for the TV series.

From a young age, VOFAN considered becoming a comic illustrator, but eventually realized he was more suited for single illustrations. He studied architecture in college, but he ultimately wanted to be a professional illustrator and became involved in many works in the field before and after graduating. VOFAN cites Makoto Shinkai, director of Voices of a Distant Star, 5 Centimetres per Second, and Your Name., and his use of lighting as an early inspiration for his art style.[1]

Vofan holding a skateboard he drew Shinobu on at Anime Central 2018 in Chicago.

Cover for Bakemonogatari, his first of many illustrations for the series.

Exclusive cover illustration by VOFAN made for the English release of Kizumonogatari.

Exclusive cover for the English edition of Nekomonogatari Black. 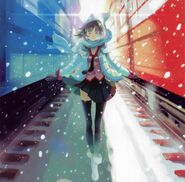