View source
watch 01:36
We're Getting Mutants in the MCU - The Loop
Do you like this video?
Play Sound

chocolate insomnia
perfect slumbers is the opening theme song of the Nekomonogatari Black anime. It was performed by Yui Horie, who voices Tsubasa Hanekawa. During the TV broadcast, it was only featured on Tsubasa Family: Part 1. During the home media release, its usage was expanded to Part 2, Part 3 and Part 4.

It is also featured as the first opening theme of Koyomimonogatari in Episode 01.

"perfect slumbers" is a J-pop song with instrumentation from acoustic guitars, bass guitars, strings, drums and piano. It is set in common time, and is currently the slowest song used for the Bakemonogatari series at a tempo of only 80 BPM. The song is mostly accompanied by acoustic guitar and bass guitar, and begins with soft strings, joined by maracas softly added into the song up to the rest of the song. The drums, on the other hand, are added from the first verse, with rhythm changes during the bridge sections. Throughout the song, the vocalist sings alone, accompanied by backup vocals at key portions of the song. The major 7th chord is used frequently. The song ends with a short instrument coda by piano.

The song carries a slow and somber pace compared to the dramatic rhythm of Horie's other song for the Bakemonogatari series, "sugar sweet nightmare", and that of other songs in the series. It tells about a girl's feelings blooming from the darkness, away from her lover's sight, and how she sees the lover's hand as a beam of light, which despite her lover's best efforts, is unable to reach her heart.

The opening credits animation used to accompany the song depicts Tsubasa Hanekawa riding a train and traveling through different places alongside a guitar. Throughout the credits, she is seen with a guitar or a portable CD player with her, and bookmarks are commonly seen. By the last verse of the song, Tsubasa is depicted standing in front of Koyomi Araragi, who is performing a dogeza. At the end, Tsubasa's hair is untied as the background and foreground colors invert, turning black to white and vice versa, and Tsubasa's cat hair ribbon is shown.

The animation is heavily stylized, and is mostly made of silhouettes and shapes that smoothly transition through each other. In the credits, only Tsubasa is rendered in 2D animation. 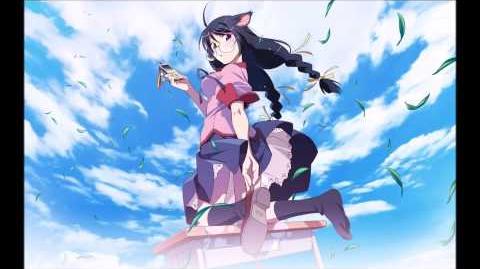