An oddity (怪異, kaii, lit. "strangeness") or sometimes translated as apparition (supernatural being) or aberration (unusual, unwelcome entity), is a general term for a supernatural phenomenon influenced by humanity.

While contact with an oddity sometimes inflicts a sort of symptom, other times it can result in the victim becoming an oddity or part-oddity themselves.

From gods to the lowest monsters, all supernatural beings classify as oddities. Oddities are commonly represented by or take the form of an animal of some sort as it allows them to blend in with reality.

What Exactly Is an Oddity? Where do they come from?

The concept is at times rather vague. While sometimes described simply as traditional folklore creatures such as vampires, ghosts, or phoenixes, oddities seem to hold a much more abstract concept. Certain evidence suggests that oddities are formed through a manifestation of feelings and ideas, as elaborated in Tsubasa Tiger, Nadeko Medusa, Ougi Dark, and Acerola Bon Appétit. In most cases, they're myths or legends that eventually became real.

Oddities can only exist through the presence of humanity. If they are not witnessed nor talked about by humanity, they weaken and eventually cease to exist. Places like Antarctica are scarce of oddities as there is no humanity to witness their existence. Oddities simply exist because people think they do, and legends about them continue to be passed down from generations. Some evidence also suggests that oddities sometimes behave as people around them perceive them to, though this appears to only affect their behavior to a certain degree.

Reasons for Attacking & the "Victim" Concept

Oddities have a natural instinct to attack or affect people in some way. Contrary to initial belief, an oddity will almost always attack a victim for a reason. In the case of vampires, they need to attack humans not necessarily for nutrition, but to ignite fear in humanity in order to make their presence known. If their description as an oddity calls that they harm humanity, they need to do it in order to continue to exist. This applies to all oddities.

From a different perspective, oddities often attack people because it's what the people want deep in their subconscious. "Victims" of oddities usually use the phenomenon as means to cope with a problem. Often, one side of "exorcising" an oddity is done by resolving the initial problem at hand.

Since an oddity is meant to be a manifestation of a myth or feeling rather than a being that acts on its own free will, if an oddity is caught lying about what it is or strays too far from its description and or purpose, an anti-existence phenomenon similar to a black hole commonly referred to as The Darkness arrives to swallow it whole along with bystanders. Apparently, it's "invisible" and can't necessarily be seen, but is heavily sensed.

In some cases, the darkness can be reverted if the "lie" the oddity was telling actually becomes true.

Oddities can be very dangerous, so there are specialists who know about them and act as "exorcists" for their victims as well as exterminators for the oddities themselves. Oddity specialists are known to have extensive knowledge on all sorts of oddities.

Examples of specialists include Meme Oshino, Yozuru Kagenui & Yotsugi Ononoki, and Izuko Gaen. Subcategories of oddity specialists include vampire hunters such as Guillotine Cutter who slay vampires, and immortal oddity experts like Kagenui or Tadatsuru Teori who specialize in immortal oddities specifically. Kagenui is also literally a modern day onmyouji, which is essentially a Japanese exorcist equivalent which are known to have shikigami servants.

Oshino specializes in collecting stories, keeping a "balance" between parties, and helping resolve cases. He has the power to do more aggressive work, but prefers not to. In contrast to Oshino, Gaen's specialty is preventing incidents from occurring at all. She's also the leader of the network of specialists in the series. The oldest known specialist in the series is Seishirou Shishirui, the original oddity slayer.

Deishuu Kaiki is a "fake specialist" who doesn't necessarily specialize in oddities himself, but knows people who do and cons people with his knowledge. He is also able to inflict "fake" or "fabricated" oddities on people, which are based on false history.

Some specialists also go by the occupation of "Ghost Buster." Coincidentally, most known specialists in the series were part of an Occult Research Club in college in which they discussed oddities and the supernatural. 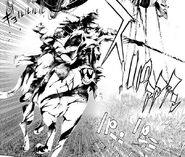 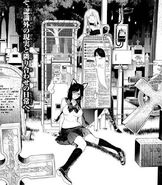