It was released on three different locations, which include the video hosting site Nico Nico Douga and Japanese television stations TOKYO MX and BS11, on December 31, 2012 with a total of 4 episodes.

Nekomonogatari Black acts as a prequel to Bakemonogatari and a sequel to Kizumonogatari, expanding on the story behind the events in the Tsubasa Cat story in Bakemonogatari.

Nekomonogatari Kuro contains a presentation fairly similar to that of the Nisemonogatari Anime, but mostly set the standard for the presentation found in Monogatari Series Second Season with a couple changes to techniques.

Screen flashes work and appear similar to before, but have a couple new changes. Besides the following techniques, text quoted from the novel is used a lot more commonly.

The number of each chapter is now flashed on screen before each scene starts. This was kept in all following TV series adaptations.

Some flashes, particularly ones for dates, have a custom white and black style, exclusive for the arc.

With many scenes taking place at night, intense lighting effects are used quite frequently. While it still seems somewhat related to the lighting, full on alternate color palettes also return after their absence in Nisemonogatari. Characters and their clothes commonly have a pale complexion with muted colors. Hanekawa is sometimes depicted with dark hair and white skin, during a scene that focuses on white, black, and red colors.

Satoru Kosaki once again reprised his role as music producer. The opening theme song for the special was "perfect slumbers", performed by Yui Horie, who voiced Tsubasa Hanekawa. The song "Kieru Daydream", sung by Marina Kawano, was used as the closing theme song. 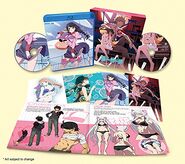 Western blu-ray set.
Add a photo to this gallery

Retrieved from "https://bakemonogatari.fandom.com/wiki/Nekomonogatari_Black_(anime)?oldid=20116"
Community content is available under CC-BY-SA unless otherwise noted.