She later develops a dependence towards Araragi (whom she calls "Koyomi-onii-chan") which slowly intensified as the events relating to the snake curse puts a pressure on her.

Nadeko has been familiar with the Araragi family as Tsukihi (whom Nadeko affectionately calls "Rara-chan"[ララちゃん]) had played with her when they were small. During one of those days, she meets Tsukihi's older brother Koyomi, then a sixth-grader, and would also soon become one of her friends when he fixed Nadeko's bike. She began to call Koyomi "Koyomi-onii-chan" since then. Her visits to their house soon ended about six years ago and, unfortunately for Nadeko, Koyomi appears to have forgotten about his first encounter with Nadeko.

This section contains content from Bakemonogatari.
Nadeko has been visiting the Kita-Shirahebi Shrine, where she sacrifices live white snakes in an attempt to cure a curse that has been tormenting her for some time. In one of her visits to the shrine, she encounters Koyomi and Suruga Kanbaru, who were en route to the shrine to place an ofuda (a kind of Shinto amulet) to the ruins of the shrine. The two later discovered her practice of slaughtering white snakes upon arriving at the shrine grounds, although they were unable to talk to her about it. Nadeko was also seen by Koyomi and Tsubasa Hanekawa the day after that in the local bookstore, reading books about the occult, which further intensified Koyomi's curiosity of her condition.

With some help from Meme, Koyomi and Suruga perform a ceremony which aims to release the snake curse from Nadeko's body, with Nadeko willingly participating. Although Nadeko was calmed by the presence of her "Koyomi-onii-chan", she soon discovers that there is another curse tormenting her, and it is a second snake curse sent by a classmate which she had rejected before. As Nadeko struggles for her life in the hands of two jagirinawa, Koyomi fights the oddities alone in a life-threatening stuggle. His intervention, although at the cost of a broken leg and arm, releases the jagirinawa from Nadeko's body.

Nadeko visits Koyomi at his school the day after she becomes cured of the curse of the jagirinawa to personally thank him and Suruga for their efforts the night before. Nadeko was only able to meet with Koyomi because Suruga sprinted her way out of the school gates by school's end, and ends up handing to Koyomi the school swimsuit Suruga lent to her for the ceremony the night before. During their conversation, she notes how different Shinobu looks at her and Suruga compared to how she does at Meme or Koyomi.

This section contains content from Nisemonogatari.
During summer vacation, Nadeko decides to invite Koyomi over to her house, taking the opportunity after both of her parents are out for work. By this time, Nadeko has long abandoned her "mostly-covered" style of clothing, and wears a comfortable set of clothes, with her forelocks combed back. Upon leading Koyomi into the Sengoku Residence after a long time, they play a few games, including Twister and The Game of Life, with the intent of attracting Koyomi's attention. Meanwhile, they talk about several things, especially about rumors that a certain charm that resembles the one used to curse her is still spreading within her school. Unfortunately for her, her mother arrived before she could fully proceed with her plan.

In Nadeko's class, the atmosphere is strained because the curses related to the charms introduced by Kaiki have exposed negative sentiments among the class, and Nadeko is pressured to do something about it as the representative of her class. She calls Koyomi for advice, and after which, a bigger serpent, which introduces himself as Kuchinawa, tells her to go to Kita-Shirahebi Shrine, where she is confronted for her killings of white snakes when she was cursed herself.

Nadeko's personality drastically changes after losing her forelocks and she ends up snapping at her teacher and to her class before leaving early from school. At this point, Nadeko resigns to Kuchinawa's request and returns to Koyomi's house, where Kuchinawa's body, in the form of a talisman, is stuck between the pages of Koyomi's adult magazines. Kuchinawa urges Nadeko to eat the talisman in return for getting her forelocks back, as well as her wish of having her love with Koyomi be requited.[2] However, Koyomi catches Nadeko in the act and cautions her to put the talisman down. Because of misunderstanding and some of Shinobu's provocation, she eats the talisman and becomes an oddity.

After several successful fights against Koyomi and Shinobu, Nadeko realizes that Kuchinawa is an oddity brought to life by her delusions, triggered after she found out that Koyomi had a girlfriend. Nadeko then tries to kill Koyomi, but Hitagi interferes through a phone call and asks her to wait until after graduation, to which Nadeko complies.[3]

Nadeko willingly let herself be "tricked" into reverting to a human by Kaiki after he told her that love and happiness aren't the only aspects of life, and that she should try pursuing a dream like her secret manga drawing hobby. Kaiki then told Koyomi Araragi to keep out of Nadeko's life from then on for her own sake since Koyomi's continuing presence in Nadeko's life would only hurt and weaken her, not help her. 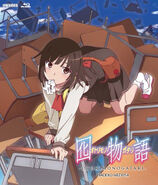 Retrieved from "https://bakemonogatari.fandom.com/wiki/Nadeko_Sengoku?oldid=13788"
Community content is available under CC-BY-SA unless otherwise noted.