Kizumonogatari (傷物語) is the film adaptation of Kizumonogatari, the second book and origin story of the Monogatari light novel series. It is the 9th anime adaptation from studio Shaft, and is composed of three parts as separate films: Part 1: Tekketsu (Tekketsu-hen, "Iron-Blooded"), Part 2: Nekketsu (Nekketsu-hen, "Hot-Blooded"), and Part 3: Reiketsu (Reiketsu-hen, "Cold-Blooded"). Each film is about an hour long, though the last part is the longest at about an hour and 20 minutes.

The first film premiered in theaters on January 8th 2016 in Japan and in February 2016 in select theaters in the United States and Europe. An official Canadian screening for the first film also came in late August 2016.

The second film premiered in Japan on August 19th 2016 and in the United States at in Akibafest 2016 and a week later in select theaters in October 2016.[1]

Kizumonogatari is a prequel to Bakemonogatari and Nekomonogatari Kuro, adapting the Koyomi Vamp arc that tells the story of Koyomi Araragi's fateful spring break and his first encounter with a vampire oddity named Kiss-shot Acerola-orion Heart-under-blade. This is the story of how he turned into a vampire and back into a human with the help of oddity specialist Meme Oshino and Tsubasa Hanekawa.

After Bakemonogatari, director Tatsuya Oishi soon started production of Kizumonogatari, but ended up in a development block while deciding how to properly adapt the story. As a result, Tomoyuki Itamura took his place as director for the rest of the TV series during his hiatus. Since the trilogy highlights the long awaited return of the highly experimental director and his team of animators, the adaptation features a drastically different style from that of the TV series. As the trilogy was announced along side the release of Owarimonogatari Episode 01, its distinct difference in direction was especially apparent.

Despite the original novel meaning to take place in a modern setting, the film adaptation generally adapts a classical presentation, with use of French text, black and white colors, jazzy scat and French music along with old looking black cars. It's been stated that Oishi used this style due to his interest in Noir films of the French New Wave era through out the mid-twentieth century. It's notable that many consider the Monogatari anime adaptations to take a lot of influence from French New Wave films in terms of unorthodox directorial techniques.

While featuring intensely animated action scenes and an over all direction reminiscent to that of Bakemonogatari, the film series is unique in that it features a high level of character animation for almost every scene, unlike the TV series which commonly shows characters being mostly static a majority of the time, especially during conversations. In general, the adaptation features a cinematic flare unique in its own right as some parts of the trilogy not only feature long scenes of silence and moving camera shots, but a lot more visual action in general with very little monologue. Oishi felt a "show don't tell" method was more cinematic, and drastically contrasted with the series' commonly frequent use of monologue commentary. The animators even used rotoscoping techniques as well as real life footage as reference material in some scenes to achieve realistic movement.

Character designs are handled not only by series character designerAkio Watanabe, but also Hideyuki Morioka, another character artist at Shaft. His influence notably gives characters a distinct appearance, with slightly different body proportions and detailed features that contrasts Watanabe's comparably sharp and simple style. Such designs even feature detailed instances such as individual strands of hair popping out of characters' heads.

Despite this more detailed, realistic, and serious style, characters also frequently take on more cartoony appearances, especially during comedic scenes. Some cartoony scenes especially appear to pay homage to 1930s cartoons. Koyomi also frequently looks to be in a slightly different style depending on who is animating him. This seems to somewhat follow another trend of the Bakemonogatari anime, as consistency in character design seemed to fluctuate quite more frequently compared to the mostly true to standard nature of character design in Final Season arcs like Tsukimonogatari and Owarimonogatari.

The following explains many of the techniques used in the films, both new and old, and how they compare to their TV counterparts.

It wouldn't be Monogatari without screen flashes, and they return in full, cinematic glory. Once again, they seem to take more inspiration from early presentation, featuring text on a solid color background as opposed to the scrapbook appearance of Final Season arcs. Also similar to earlier versions, the cards commonly feature nothing more but the text stating the color of the card, as opposed to frequent purpose of quotes in recent TV adaptations. The color cards are also all in French, with the "NOIR" (BLACK) card appearing especially frequently. In one instance in the third film, a "ROUGE" (RED) card appears to be transparent, before a blood splatter fills in most of the background.

The flashes still feature occasional text and dates, although they're also commonly in French.

While the TV series typically experiments with occasional color palette swaps, a large portion of visuals in the films consist of a pinkish color palette with an emphasis on various shades of red and white. Characters are also commonly depicted as having red eyes.

A muted color scheme, showing characters with paler skin, is also quite frequent. While the saturated, red color scheme seems to mostly be used to relate the the theme of blood in the story, it's worth noting that it's quite similar to palette swaps featured in the Bakemonogatari adaptation.

Also unique to the films is the background art, which mostly uses realistic, 3D CGI backgrounds and real-life photos, unlike the abstract, mostly 2D backgrounds of the TV series. Familiar locations from the show, such as Eikou Cram School and Naoetsu Private High School, appear entirely different in this new style. Despite all of these changes, background characters are still entirely non-existent, retaining a similar atmosphere to the TV series.

After an extremely long absence, the use of real-life photos and realistic imagery returns. Most actual real life photography is still used quite sparingly, but is occasionally used for different depictions.

The backgrounds seem to relate heavily with realism over all. While not photo realistic, the backgrounds are typically shown as 3D, computer generated, realistic areas that starkly contrast with the animated characters.

Most objects also take on this style, clearly popping out when held by the 2D characters. Some objects appear to actually be real life photos.

Back and Forth "Before / After" Cuts

A new technique, and likely a film exclusive, is the unique use of cuts through out the trilogy. Many scenes cut visuals back and forth between two different instances, showing the cause and effect of some scenes all at once. One example includes showing a body part fly off in an off screen perspective, before cutting back to another showing what caused it to occur.

Satoru Kosaki also returns as the composer for the films after his absence from Hanamonogatari, Tsukimonogatari, and Owarimonogatari, which were composed by Kei Haneoka. Besides some dramatic orchestral barque and electronic pieces, the soundtrack especially retains a jazz influenced, scat singing theme. A couple songs from the Bakemonogatari soundtrack as well as others return as remixes.

The first form of an animated Kizumonogatari adaptation was presented in the prologue of Bakemonogatari that was featured in the first minute of the first episode.

A full anime adaptation based on Kizumonogatari was first announced on July 28, 2010, where the announcement was attached on copies of the then newly-released book Nekomonogatari Black.[3] A movie adaptation was announced in late March 2011, where it is also stated to premiere in 2012.[4]

A trailer was also released to promote the movie, where a partial voice cast was shown, including an unknown voice actor depicted as "xxxx". (This voice actor was later identified as Maaya Sakamoto, who later replaced Aya Hirano, who previously voiced Shinobu Oshino in the Bakemonogatari drama CDs, from the Nisemonogatari anime series onwards.) The trailer itself featured a scene of Koyomi panting in a realistic ally way setting as scat music played in the background and the previously mentioned cast text flashed on the screen. One red and white screen flash said "BLOOD STORY." Along with short clips of Koyomi shivering and looking in multiple directions, short clips showing Episode ,Tsubasa Hanekawa and two younger versions of Kiss shot holding hands were briefly shown. The trailer ends with Koyomi's head popping off as the music comes to a dramatic end. The trailer was the earliest preview of the adaptation's music and art style, featuring unique character designs and realistic backgrounds. None of the clips from the trailer were used in the final version as most seem to be conceptual, but many are largely alluded to.

On April 10, 2012, the movie was officially considered "delayed past 2012" in a supplement to an issue of the Nisio Tsuushin newsletter.[5] Word on the release of the film was sparse for three years.

On October 4, 2015 after the premiere of Owarimonogatari, the movie was officially announced as a three part trilogy composed of the films: Iron-Blooded (鉄血篇, Tekketsu-hen), Hot-Blooded (熱血篇, Nekketsu-hen) and Cold-Blooded (冷血篇, Reiketsu-hen).[6] The titles are in reference to Kiss-shot Acerola-orion Heart-under-blade and her infamous description as an iron-blooded, hot-blooded, cold-blooded vampire.

Prologue and Announcement PV vs Final

A virtual reality experience based off the films was released for free on the Japanese Playstation Network store upon the release of the third film on blu-ray.

Storyboards for the second film previewed in the first film's art book.

Storyboards for the third film previewed in the second film's art book.

Key visual for the second film.

Poster for the second film.

Key visual for the 3rd and final film. 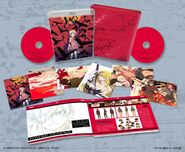 Part 1 western blu-ray set, complete with post cards, an art book, and for the first time, an official soundtrack. 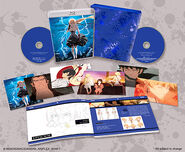 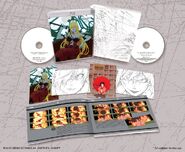 Retrieved from "https://bakemonogatari.fandom.com/wiki/Kizumonogatari_(movie)?oldid=19427"
Community content is available under CC-BY-SA unless otherwise noted.